On Thursday, March 16 2017, the Visual and Digital Cultures Research Center (ViDi) and the Faculty of Social Sciences at the University of Antwerp hosted a PhD Master Class with Professor Joseph D. Straubhaar. Professor Straubhaar is the Amon G. Carter Centennial Professor of Communications in the Department of Radio-TV-Film at The University of Texas at Austin and the current Director of the Moody College of Communications’ Latino and Latin American Studies Program.

In this Master Class, Professor Straubhaar, whose research and teaching interests include global media, digital media and the digital divide in the U. S. and other countries, Brazilian and Latin American television, media and migration, and global television production and flow, discussed the work of a select group of PhD students in communication studies and media studies. 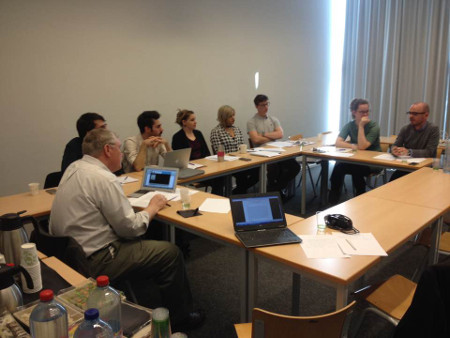 Each PhD student presented their research by means of a short pitch, after which Professor Straubhaar, who had familiarized himself with the work of the participants in advance, provided them with detailed feedback. The following research projects were presented during the master class: