On April 5-7 2017 nearly 100 international scholars gathered at Erasmus University Rotterdam for Locating Imagination: Popular Culture, Tourism, and Belonging. The goal of this conference was to bring together scholars working at the intersection of (popular) culture, media, and place, presenting this research in an interdisciplinary setting that would allow for a range of explorations around this important issue. Over three days and 68 presentations, this dream was realized.

Scholars from throughout the world – Australia, Japan, Russia, the United Kingdom, and more – met to present and discuss a wide range of topics related to media and place. Represented disciplines included media studies, cultural geography, literary studies, communication studies, ethnomusicology, and more. The research presentations reflected this diversity, asking questions about such things as the way in which regions are represented on screen, how fans recreate scenes and activities in videogame-related places, city branding, football tourism, and the relationship between urban legends, place, and the Internet. The diversity of these presentations showed the variety of ways in which this one topic – the relation of place, the media, and culture – can be discussed, and scholars seemed to enjoy making connections with those not in their normal disciplines. 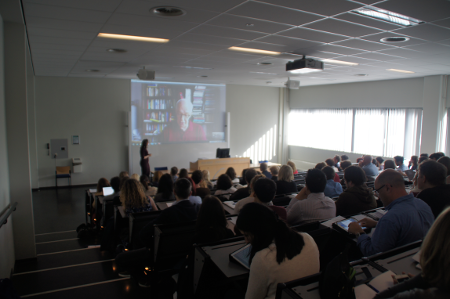 The different ways in which place, media, and culture meet was also reflected in the keynotes. Professor David Morley opened the keynote via Skype, discussing the “revival” of Birmingham in recent years through the mobility of messages as well as people and commodities – what gets represented and turned into “heritage,” and what doesn’t? The second day featured Dr. Marie-Laure Ryan, who discussed how stories create places, and what ways people visit narratives, using a case study of Orhan Pamuk’s The Museum of Innocence as an illustration. Finally, Professor André Jansson explored the culture and practices of “urban explorers,” looking at the way that media practices influence both the idea of exploring urban decay and the way in which its practitioners enact it. Attendees were also treated to a special expert session on Fandom and Place, featuring Professor Cornel Sandvoss on the politics of place in fandom, Dr. Mark Duffett on the history of fans at Graceland, and Professor Matt Hills on the “brand fandom” enacted at official media tourism locations.

This conference marked not only the end of the NWO-funded project Locating Imagination: An Interdisciplinary Perspective on Literary, Film and Music Tourism, but the beginning of the ERC project Worlds of Imagination, a comparative study of film tourism in South Korea, the United Kingdom, India, Brazil, and Jamaica. The four PhDs and one postdoc of Worlds of Imagination presented their project and their first thoughts on it, while the three PhDs of Locating Imagination presented their final thoughts.

All in all, it was an inspiring and stimulating event, and we hope that the attendees enjoyed it as much as we did.