Researchers and citizens alike may have felt a sense of discomfort following the Edward Snowden revelations in 2013. This unease may have been heightened following new anti-terror (and pro-surveillance) measures introduced in countries like Australia and France. It was with these concerns in mind that NeFCA’s Media Systems & Policy division (MSP), along with the Erasmus Research Centre for Media, Culture and Communication (ERMeCC) and Studium Generale Erasmus, co-hosted a one-day public symposium on Surveillance, Big Data and Digital Rights in Rotterdam on Tuesday, the 24th of March, 2015. 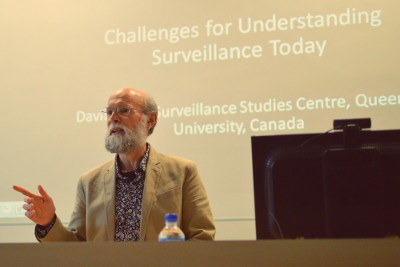 Three prominent scholars were given an opportunity to discuss the current state of surveillance in the information society. Dr. Benjamin Mako Hill (University of Washington) discussed hacking as a form of media literacy, but also as a critically-important means of social engagement. Dr. Marisol Sandoval (City University London) unpacked the ‘social’ in social media in order to critique current corporate social responsibility initiatives by major platforms, and suggest alternatives that may support a more robust civil society. Finally, Dr. David Lyon (Queen’s University Canada) considered the social and cultural dimensions associated with living in a ‘post-Snowden’ society, and what this means for scholarship as well as citizenship. These talks were supplemented by lively and engaged discussions with a diverse audience.

In addition, NeFCA’s MSP division also co-hosted a practical workshop on counter-surveillance tools, which took place immediately before the talks. This workshop allowed people with no prior technical skills to learn about the tools and techniques available to protect their personal information on mobile devices. Participants had the opportunity to take active steps to protect values like privacy and autonomy, and as such this event served as a helpful form of praxis to accompany the scholarly discussion.

As an additional public outreach, NeFCA’s MSP division co-hosted a public screening of the documentary The Internet’s Own Boy: The Story of Aaron Swartz (2014). Aaron Swartz was an information activist and a programming prodigy who made a substantial contribution to the contemporary media landscape at an early age. He was also involved in a two-year legal nightmare as a result of his attempt to provide proprietary peer reviewed academic journals to a wider public. Following this ordeal, he took his own life at the age of 26. This screening was followed by some insightful remarks from Dr. Mako Hill, who was a close colleague of Aaron Swartz.

These three events benefitted from an enthusiastic and critical audience, and serve to underlined the importance of surveillance practices as a scholarly topic, as well as a societal concern. The symposium’s organisers would like to thank NeFCA and ERMeCC for its continued support in these endeavours, and looks forward to future collaborations on this topic.