In cooperation with the HealthNar exchange program, the NeFCA health communication division organised a symposium titled: “Mediated Narratives, Interactive Technology, and Health Behaviors”, at the University of Antwerp. On the first day, the potential of entertainment-education for health promotion was explored. On the second day, new technologies and new storytellers were put in the spotlight. The symposium included keynote lectures, poster presentations, interactive sessions, and a roundtable discussion. Several renowned scholars and field experts contributed.

The first day started with a word of welcome by Enny Das (Radboud University), followed by the first keynote, “Transportation into a narrative world”, by Melanie C. Green (University at Buffalo). In her talk, she discussed empirical work on the nature, antecedents, and consequences of narrative transportation (the experience of becoming completely immersed into the world of a story) across a variety of domains (particularly health). In the second keynote, “Entertainment education collaboration: The turtle and peacock effect”, Martine Bouman (Centrum Media & Gezondheid, & Erasmus Research Centre for Media, Communication, and Culture) shared her experience and research on entertainment education strategies, illustrated with examples from (digital) soap and drama series. The third keynote, “Tackling health issues in soaps”, was given by Guy Thys (VRT), the creative director of the Flemish soap “Thuis”, who discussed how health issues have been integrated into the series. His talk covered specific cases that have occurred in the series, illustrated by film clips from the show.

After a refreshing lunch and poster session, Markus Appel (University of Koblenz-Landau), John de Wit (University of New South Wales), and Heidi Vandebosch (University of Antwerp) explained the collaborations and output resulting from the HealthNar program. This was followed by a fourth keynote, “Health promotion in Flanders: Reaching and convincing audiences – current challenges”, by Liese Weemaels from VIGeZ: (the Flemish Institution for Health Promotion and Illness Prevention). In her talk, she discussed the relationship between communication and behavior change, and explained how VIGeZ aims to change people’s health behaviors. 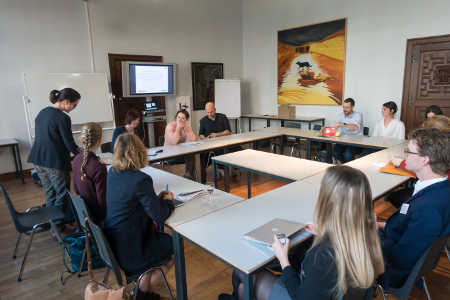 Following a short coffee break, the second part of the afternoon was devoted to three parallel interactive sessions on “scientific facts – media fiction – and “fixers”: integrating scientific knowledge in entertainment formats to promote health”. In the session on cyberbullying, which was moderated by Karolien Poels (University of Antwerp), Nic Balthazar (Belgian television and film maker), Nadine Bernard (Ketnet, Flemish TV station for children), and Sibille Declercq (Awel) discussed how they handled topic of cyberbullying in their work with and for youngsters. The session on sexual health was moderated by Michel Walrave (University of Antwerp) and included presentations of John de Wit (University of New South Wales), Steven Eggermont (KULeuven), Tamara Rosenbach (Gemeente Utrecht – Volksgezondheid), Nicolas Takken (Gemeente Utrecht – Volksgezondheid), Laura Vandenbosch (KULeuven/University of Antwerp), Joris Van Ouytsel (University of Antwerp), and Lies Verhetsel (Sensoa). The presentations sparked a lively discussion between the participants, integrating points of view from academic researchers and practitioners. The third session focused on the topic of food and was moderated by Charlotte De Backer (University of Antwerp). In this session, Julie Dare (Edith Cowan University), Nicolas Guggenbühl (Paul Lambin Institute), Christophe Matthys (KULeuven), Veerle Rijckaert (Flanders’ FOOD), Tim Smits (KULeuven), Manon Van Aerschot (foodblogger), and Ellen Van Gool (foodblogger) discussed the importance of healthy food promotion in the media. The day ended with a reception during which all the food for thought was evaluated and digested.

The second day of the symposium started off with a keynote by Hilde Van den Bulck (University of Antwerp). In her talk, titled “’She died of a mother’s broken heart’: Media and audiences framing health narratives of heart-related celebrity deaths”, she discussed the relevance of celebrities, media, and audiences in framing health narratives relating to celebrity deaths through cardiovascular diseases, based on qualitative research on the heart-related deaths of Carrie Fisher, Debbie Reynolds, and Alan Thicke. This was followed by the keynote “Social media and suicide prevention: New opportunities or threats?” given by Kirsten Pauwels, the director of the Belgian Center for Suicide Prevention. In this keynote, she discussed the influence of social media on suicide prevention, illustrated by recent examples of celebrities using the internet to ventilate their suicidal ideation, and the possible impacts of these suicidal messages on preventive efforts. After these two talks, a coffee break was welcome to lighten the spirits. After the break, Tom Baranowski (Baylor College of Medicine) presented a keynote on narrative involvement in games for diet and physical activity change. In his talk, he presented research from him and his colleagues for which they developed games to improve youngsters’ diet and physical activity, and addressed the challenges inherent in this field of research. The last keynote of the second day, titled “Our friends and helpers – Smartphones as a measurement tool and delivery channel for personalized health interventions” was given by Christopher Lorenz and Silvana Weber (University Koblenz-Landau) from Soma Analytics. They discussed the potential of smartphones and smartphone-based digital solutions as a high-frequency, unobtrusive measurement device for indicators of health and wellbeing, as well as a low-cost delivery channel for tailored health interventions, and presented their proposal for a mental health promotion app.

This symposium could be organised thanks to the HealthNar IRSES Marie-Curie/Seventh Framework programme (http://healthnar.ruhosting.nl), the Netherlands-Flanders Communication Association (NeFCA) and the Department of Communication Studies at the University of Antwerp.